Actually, I was the Real One Wiki
Register
Don't have an account?
Sign In
Advertisement
in: Characters, Male

Isaac Weinberg is a member of the Weinberg Family, the older brother of Rowena Weinberg and the uncle of Cosette Weinberg.

Isaac has shoulder-length red hair that has bangs hanging on either side and red eyes.

During Rowena Weinberg's happy life with Ludwig Parvis, Marquess Simon Edinburgh has falsely accused Isaac and framed him for the downfall of Duke Parvis.

When Rowena finds out that she is pregnant with a baby girl (whom she named Cosette) after getting divorced and kicked out of the Parvis Family, Isaac was the only person who knew about the baby's existence. After she gave birth and sacrificed her soul to a demon to save her daughter, get revenge on the Edinburgh Family for ruining her marriage and Ludwig Parvis for abandoning her, Rowena left Cosette in Isaac's care.

Years later, Isaac introduces Cosette at Zekehart Parvis' birthday banquet as the Duke's 'real' daughter, and he chose to do it at his party to get as much attention as possible from the nobles. Ludwig agreed to Cosette's request of proving herself as his daughter since all that mattered to him was who inherited his blood. Thus, Cosette was allowed to live in the Parvis Estate temporarily, despite her past being a clean slate even after much investigation. 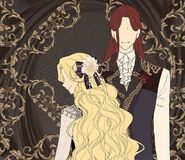