Actually, I was the Real One Wiki
Register
Don't have an account?
Sign In
Advertisement
in: Episodes

Devoted Daughter is the first released episode of I Am the Real One by Yuun. 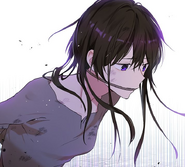 Keira on the execution ground.

Cosette bids Keira farewell after saying something to her.

Characters are listed in the order they first appear.

Community content is available under CC-BY-SA unless otherwise noted.
Advertisement